If you were to ask me what the best new IP to release in the last few years was, I’d ultimately have to say Horizon Zero Dawn. If you haven’t played it yet, you’re in for one of the best narratives in gaming since The Last of Us, in my expert* opinion. The combat is very addictive, as well, but I was mostly impressed with a story that was so fresh in comparison to many of the games we have today. I hope this game can help you enjoy it as much as I did.

I promise it all makes sense after a few hours…

Due to the fact that I love the story so much, a lot of the rules are going to revolve around the story and quests. That is, besides my favorite aspect of this drinking game, which is The Name Game, which I’ll display first. What is it, you ask? Well, Aloy gets a lot of, uh, “titles” throughout the course of the game. I’ve taken the liberty of writing most of them down and assigning drink values to them. Some of these might be slight spoilers, but some of them are sarcastic, so you can’t really know which ones are serious! Enjoy! And let me know if there are any I’ve missed, and I’ll be sure to add them to the list.

It really is almost this pretty in-game. Okay, I’ll stop drooling over it.

You Fail Sneaking up on an Enemy – 5

Use the Elevator – Chug!

Take a drink any time you receive damage from a machine.

Handsome Jack, here! I bet you came to this page looking for a good time with some friends. Well, I’ve got some news for you, Vault Hunter: It’s going to be a shit time, because your friends are shit. And you are, too, probably. But, despite these shortcomings, I’m still going to give you some guidelines on how I want you to play my game that might benefit your overall objective of getting with the girl across the hall or starting up that garage band you guys mentioned 46 Tuesdays ago.

That’s right 2K Games, I said MY game. Get lost.

Now, I’m gonna lay out the list of ways to slow you d….I mean, get you through this grand adventure of villainy against a righteous hero. I’ll tell you one thing to get you started: When you hear the name of your lord and savior, you better be drinking.

Someone Mentions the Vault – 1

Someone Calls You a Vault Hunter – 1

Someone Takes a Drink of Alcohol – 5

Travel to Location Together – Social

Pick up Eridium – Drink the Value of the Eridium Obtained

Evoland is an interesting Action RPG adventure that evolves as you play it. The game is on the short side, and there are points where you might end up dying constantly with possible rage quit… so it’s a perfect single player drinking game!

I never found this. And it would have really fucking helped.

I beat the game with only two sessions lasting about five hours total. I hear the second one is longer, but who knows. Some of the same rules might apply? Let me know if you venture there. For now, enjoy the game below!

Any Character Gains a Level

Miss The Enemy in Turn-Based Combat

Blow Yourself Up (And Die) – Shot

Someone In The Story Dies – Shot

You Lose at “Cards” – Drink Difference in Points x2

Get ready to die to this guy a few times. He just loves to hug.

I’ll admit, I never touched a Tomb Raider game until this one, but my girlfriend enjoyed the series back in its heyday. The definitive edition was available on the PlayStation store for $5, so it seemed like an easy purchase. Of course, we’d sit down and immediately make a drinking game for it.

I didn’t even know there’d be clips like this before buying.

We found ourselves highly entertained with the game we conjured up, especially on some of the more ridiculous rules (we definitely made it a shot for when THE Tomb Raider says she hates raiding tombs). It’s technically a single player rule set, but I do suggest it with a friend. It’s easy to pick up at any spot, and the only variation to the rules is you only drink for your own deaths.

I would imagine most of the rules apply to Rise of the Tomb Raider, as well, but I can’t be 100% sure on that. It could also apply to the older games… but probably not well.

You See a Dismantled Airplane / Helicopter – 2

I waited 10 fucking years for this game. Announced way back in 2006, the title was supposed to launch alongside Final Fantasy XIII as Final Fantasy Versus XIII, and everyone wanted it so bad. Like, boycotting Square Enix and not supporting them until it released bad. That’s mainly because FFXIII was such a letdown with too much linearity and an uninteresting story, though I do enjoy the battle system once you get closer to the end of the game. Anyways, if you’re playing FFXV now then you probably know all of that. You’re welcome for my useless rambling.

Moving on. I love the game. It might have some flawed areas, and it’s a bit of a mess. But it’s a mess in the way you might remember opening presents on Christmas morning. You’ve just finished tearing everything apart, there’s wrapping paper strung about everywhere, and there’s so much trash to clean up, but look at all the cool shit you got out of it. A great battle system, interesting characters (best if you’ve watched Brotherhood), a great story – once you’ve done a bit of research to fill in the gaps, and an open world unprecedented in a Final Fantasy title.

Sorry, this isn’t a review site, but I felt I had to give my two cents. For as many hours as I’ve already put into the game, I’ve actually kept the drinking rules fairly easy for this title. That’s largely because there are quite a few great recurring elements strung about. I’ll say, this is best for the open world questing. I do have rules set up for story elements, but it’s not quite at the same level, considering most of your time will be spent on your own because the story is on the short side. 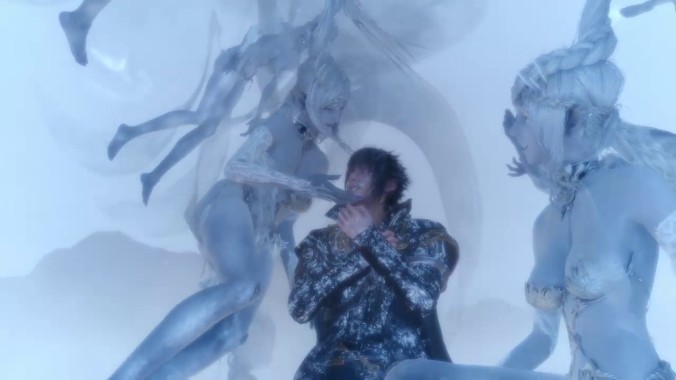 Did someone say… frozen margaritas?

Someone Dies in Battle – 5

Ignis Comes Up With a New Recipe! – 5

Realize You Forgot to Rent Chocobos Before Going Out – 10

Hear a New Character Line (“Is Ebony really all that good?”) – 2

Gentiana / Carbuncle Appears in a Photo – 5

Drink 2 for every minute the car ride is

If you encounter animals crossing the road, drink until they’re finished crossing

Skyrim has been out for ages now, and, having just jumped back into it, it’s as addicting as ever. I decided to write up a drinking game for it simply because I wanted to revisit the gorgeous countryside and reanimating dead corpses, but I wasn’t sure it was going to be the best material to drink to. I was wrong. There are a few recurring elements that walk the edge of comical at how often they pop up, usually within succession. It’s a bit of a shorter list than usual, but it works. Let’s get into it.

You know how Tyler Durden “re-imagines” himself as Brad Pitt? That’s this guy for me.

Any form of the word “Dragon” is mentioned – be prepared.

Someone comments on your race, gender, appearance.

Someone asks if you’re sick.

Any of the recruiting groups are mentioned – Legion, Stormcloaks, Thieves Guild, etc.

You level up – drink the number of your new level.

Any skill goes up.

Fail a lockpick attempt – drink for each broken pin.

You find some kind of alcohol in a chest / container. Drink for each one.

Take a shot if you let your horse die because shame on you.

All I can say is a few conversations with the Jarl and the Greybeards about dragons and dragonborn, and you’re gonna forget you already accidentally killed your horse three goddamn times.

Titan Quest is an older action RPG on the PC. In fact, it’s been 10 years since its initial release, but the developers have come back to this one and done some remodeling. So this is to celebrate that. Resembling Diablo in many ways, the game mostly revolves around creating a killing machine to sweep through the game. Given that, the drinking game will mainly revolve around killing, quests, and items. It’s a simple but effective game.

I haven’t played the most up to date version of the game, but the rules should be similar. Multiplayer mode can also focus more on kills and item drops to make communication easier. It also helps match the pace a bit better that way.

I didn’t realize this was going to be a nudist party.

Notified You’re Out of Room – Drink 2 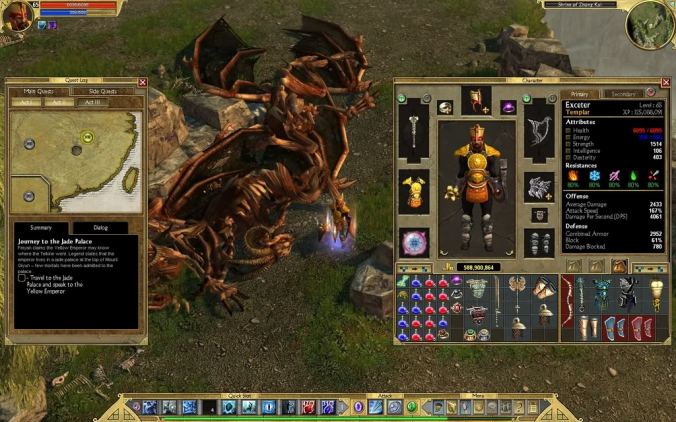 This seems like the ideal time to check my inventory.

This game is best played with quick shot items. We use the same strategy for Diablo III by using Fireball, and it’s great to do right before going to your weekly volleyball game. Get wrecked.

Kick off Memorial Day Weekend with our new #Fortnite #drinkinggame! We promise it's a great way to get rekt while waiting for another burger off the grill. Link is in the bio! #gaming #playstation #xbox #drunkgamer #pc #pcgaming #mobile #mobilegaming #twitch #fortnitecommunity #fortnitebattleroyale
Let summer begin. What games are we binging these next few months? #beer #cheers #leinenkugels #videogames #gaming #playstation #xbox #drunkgamer
We are back after a long hiatus with our new #TheLegendofZelda #BreathoftheWild drinking game! Link is in the bio. Let us know how it goes! #drinkinggames #partygames #drinks #party #beer #gamer #NintendoSwitch #gaming #playstation #xbox #drunkgamer
Sleep is for the weak 😎
😎 #videogames #gaming #rollercoaster #rollercoastertycoon #management
Enjoy a great PBR #drinkinggame at the bar tonight with our new #Spaceteam game! It's a great way to make new friends, who may or may not hate you. Link is in the bio! #drinkinggames #partygames #drinks #party #beer #gamer #gamers #gaming #mobilegame